“The starting point for our work on democracy is having evidence-based information”, said EU Commissioner for International Partnerships, Jutta Urpilainen, at the launch of the European Democracy Hub. In her keynote address, Commissioner Urpilainen welcomed the creation of the Hub alongside the European Commission’s goal of putting democracy support at the heart of post-COVID recovery.

There is extensive research on the global state of democracy and a wealth of evidence from individual programme evaluations, but there is currently much less attention paid to the analysis of  democracy support policies. In order to fill this gap we have partnered with Carnegie Europe to launch the European Democracy Hub, which aims to provide a permanent platform for expertise on European democracy support. It brings together Carnegie’s strong research background with EPD’s practitioner network.

The European Democracy Hub was born out of the need to explore and monitor democracy support policies and politics, rather than just democracy itself. Donors have limited means of knowing who is doing what in the field, and there is no detailed or reliable data about funding and programmes for democracy support. The Hub’s goal is to contribute to collective efforts to improve the relevance, impact and learning of European efforts to support democracy at home and abroad.

The Hub brings together prominent academics and practitioners, all engaged in their own efforts to research and support democracy. Through joint research, debate, and discussion, the Hub will act as a collective resource to accompany the design, implementation, monitoring, evaluation, and learning of democracy policies and actions at the European and member state level. 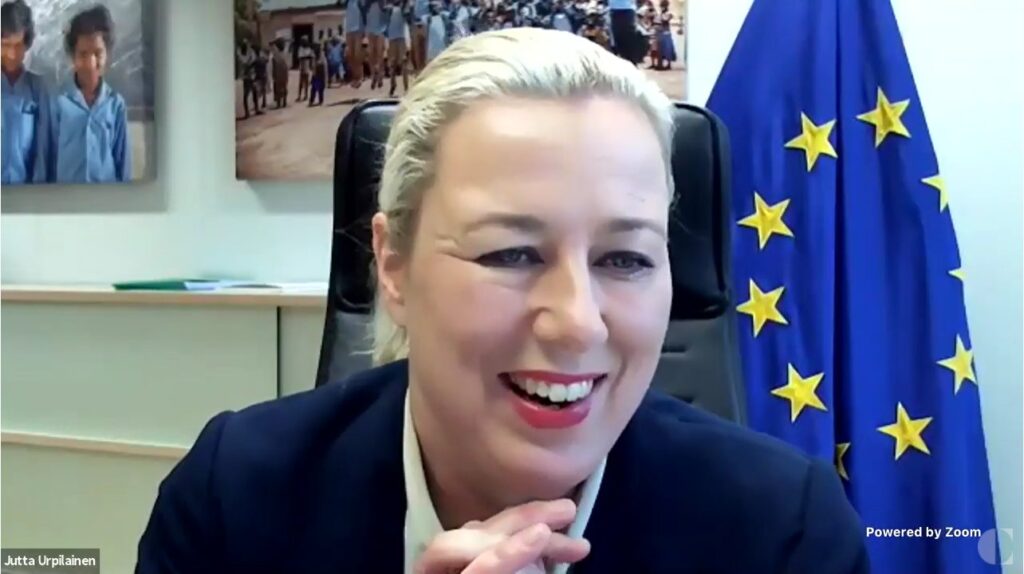 In conversation with EPD’s Executive Director Ken Godfrey, Commissioner Urpilainen outlined the EU’s strategy to build an “alliance for democracy” centred on multilateralism and aid conditionality to protect fundamental rights. The objectives will be furthered through a dedicated budget of €1.5 billion under the NDICI’s Human Rights & Democracy pillar, the new EU Action Plan on Human Rights & Democracy, and Team Europe Initiatives for democracy support.

The Commissioner also stressed the need to strengthen the efficiency and accountability of democratic institutions, all the while developing partnerships with “like-minded countries” and being inclusive towards those who are not in power.

Two of the academics supporting the European Democracy Hub again reiterated the need for such an initiative. Dr. Julia Leininger from the German Development Institute advocated for a multidirectional and integrated approach to democracy support. She argued that the EU should “learn from its own experience, communicate with others, and be open to learn from other countries”. That remains crucial in a multipolar world where tensions grow both among and within states.

Reasserting the purpose and usefulness of the Hub’s mission, Prof. Staffan I. Lindberg from the V-Dem Institute called for a collective academic effort to collect missing evidence on what works in democracy support. However, in light of geostrategic developments, he also insisted on designing rapid responses to the “many established enemies working strategically to undermine democracy and human rights.”

What’s next for the Hub

The European Democracy Hub has already begun to produce research that can increase the relevance, impact, and learning of European efforts to support democracy worldwide. Among the topics covered so far are: responses to the restricted civic space resulting from COVID-19 measures; the EU’s priorities to support democracy and state building in Armenia; the reasons why the conflict in Ethiopia’s Northern Tigray calls into question authoritarian aid; and how the EU’s new human rights sanctions regime connects to the rest of its foreign policy.

Some of the research that will be published by the Hub in the upcoming months looks at the conditionality of aid, political developments in Belarus, and democracy support in dominant-party states. Together with public events to engage the wider public, the Hub plans to convene regular policy roundtables to contribute to a more evidence-based, systematic, and coordinated democracy strategy in Europe.

Read the Hub’s research on its new website, and stay informed on future events by following EPD, Carnegie Europe, and our hashtag #EuropeanDemocracyHub.