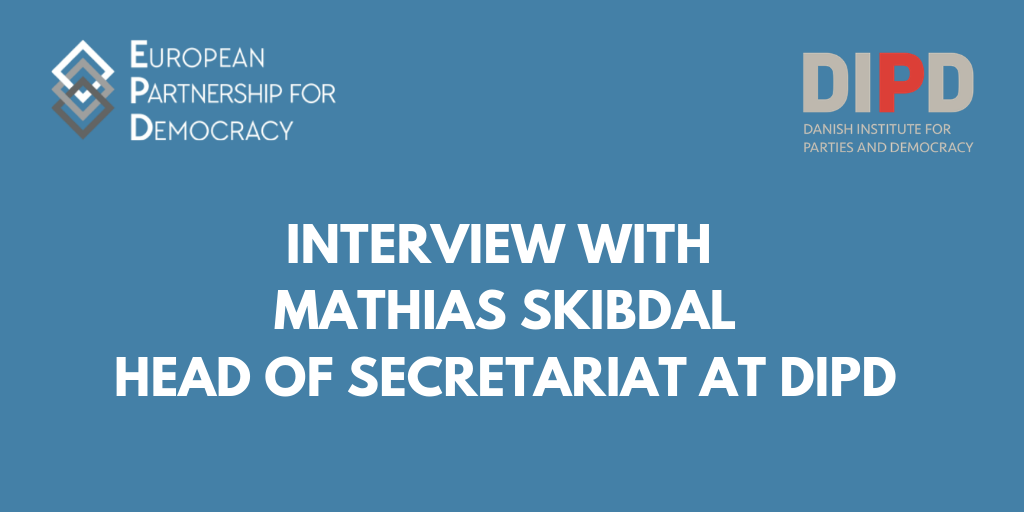 On April 2019, the European Partnership for Democracy proudly welcomed a new member to its network. On this occasion, we have invited the Danish Institute for Parties and Democracy (DIPD) for an interview to present DIPD’s vision, approach and programmes. We had the pleasure to meet with Mathias Skibdal, Head of Secretariat at DIPD, who has kindly accepted to help us to better understand DIPD’s support for democracy.

The defining characteristics of the Danish Institute for Parties and Democracy (DIPD) all stem from the history of DIPD. DIPD was established by law in May 2010 as a collective effort of all the political parties represented in the Danish parliament. As Mathias recalls, the Danish political parties came together in the recognition that Denmark’s leaders have something to contribute to the existent development cooperation and especially programmes carried out by the Ministry for Foreign Affairs. As a result, “DIPD has the support and the active membership of all 9 political parties with a parliamentary representation in Denmark.” For Mathias, the defining features of DIPD’s modus operandi and identity are the multi-party engagement on the one hand, and the direct involvement of Danish political parties in programmes on the other hand.

The Danish way of approaching partnerships: trust and responsibility

Political parties are DIPD’s raison d’être, Mathias stated, because they are “the missing link in democracy support”, explaining that setting up relations between political parties in Denmark and in other parts of the world is “something unique that DIPD can deliver.” Overall, DIPD’s vision is to contribute to the development of well-functioning democratic political parties, multi-party systems, and other institutions as central stakeholders in a democratic culture in selected developing countries. When asked how he would describe what differentiates DIPD from other organisations working on democracy support, Mathias explained that DIPD has a very ‘Danish way’ of approaching partnerships, characterised by long-term partnerships based on mutual trust and responsibility. A lot of responsibility is being given to the partners, whose ambitions and capacity are at the forefront, he argued. To quote one of DIPD’s former Director’s old saying: “we are not in the business of money changing hands, we are in the business of delivering inspiration.”

While this philosophy is commendable, the operating environment for democracy support organisations has arguably toughened with the ongoing global trend of democratic backsliding. Having asked Mathias about the relevance of DIPD’s work in view of today’s challenges to democracy, Mathias stressed that more than ever, there is a need for partnerships and for support of democratic development. For Mathias, “questions about climate change, economic integration and growth and immigration are questions that cannot be handled in national policies alone,” stressing the importance of dealing with global issues at a global level. The type of partnerships provided by DIPD and the EPD network can help build these relations and provide answers to global challenges, he argues: “It is of capital importance that we all continue to strengthen our engagement at a global level.”

So, what does DIPD’s approach to democracy support look like in practice? One of DIPD’s first projects, set up in 2010 in Nepal, is emblematic of how a DIPD project has successfully contributed to establishing a dialogue across party lines against the backdrop of historical political divisions. For Mathias, the multi-party project in Nepal exemplifies DIPD’s approach, due to the large degree of responsibility bestowed upon the Nepalese parties and the combination of the two strands of DIPD’s work – multi-party engagement and the direct involvement of Danish political parties. On the one hand, DIPD supported the internal party organisation by strengthening the local branches and by strengthening the representation of women and youth both within the party and in the elections. On the other hand, DIPD’s mission was to deepen the relationships between parties, thereby overcoming the history of political divisions and the harmful memories of the civil war. “The parties who had once killed each other during the Nepalese civil war are now very eager to collaborate and share experiences”, commented Mathias. “It is a wonderful example of DIPD’s fingerprint.”

Although DIPD works strategically on different engagement areas, gender and youth representation are two areas that are central to DIPD’s identity. In some countries, DIPD has also included the questions of geographical ethnicity in representation. “In Myanmar, for instance where NIMD is also involved, the question of ethnicity and federalism is very important to representation,” Mathias explained. More importantly, cross-political collaboration continues to be central to DIPD’s work. “Building relations between political parties, working on joint-policy proposals, doing coalition-building and so forth constitute DIPD’s identity and still continue to do so.” As for the future, “we want to come up with better ways of supplying inspiration to our partners”, Mathias concludes before adding that DIPD is further developing other engagement areas such as support to inclusive policy development, issue-based politics and the link between political parties and human rights. These provide fantastic windows of opportunities for organisations working on democracy support.

We are very excited to have DIPD as a new member of the EPD network. We are thankful to Mathias Sibdal for taking the time to talk to us about DIPD’s inspiring approach to political party support.

Find out more about DIPD’s work

Read more
New EU Action Plan on Human Rights and Democracy: A pledge to a more inclusive future
Back To Top
This site uses cookies: Find out more.