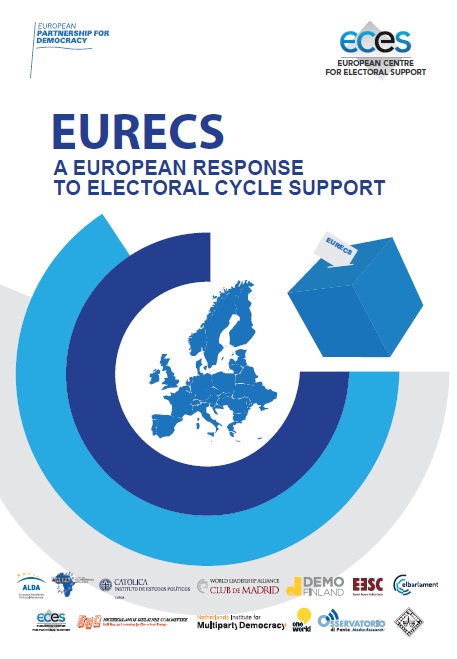 The European Centre for Electoral Support (ECES) and other members of the European Partnership for Democracy (EPD) were delighted to officially launch the paper describing their new strategy called “A European response to electoral cycle support” (EURECS).

EURECS outlines the lessons learned accumulated over the last five years from ECES and EPD members in support to electoral and democratisation processes. This initiative is very much in line with the five strategic areas of the EU Action Plan on Human Rights and Democracy 2015-2019, and the call to “strengthen long term planning and integrated deployment of all aspects of EU and Member State support to the electoral cycle, by exploring innovative aid delivery mechanisms”.

The main aim of the EURECS is to offer the EU, its Member States, other European donors and beneficiary countries an innovative delivery mechanism for electoral and democracy assistance to implement projects and programmes that are consistent with European values and EU policies. Secondly, it is built to help prevent, mitigate and manage electoral related conflicts, in line with international standards, commitments and obligations. Lastly, based on the idea that elections are long-term processes, EURECS is designed to include a wide range of actors from election management bodies, civil society, political parties, local authorities, parliament, security forces and media to ensure a truly comprehensive and more sustainable approach.

The EU has now become one of the most important global players in the promotion of credible and transparent elections through its election observation and electoral assistance activities. These complementary and mutually reinforcing activities are often embedded in a broader support framework including institution-building. However, the objectives of the Communication of the Commission 191/2000 on Election Assistance and Observation which opened the modern era of EU electoral support, have been only half achieved. While the observation pillar has considerably evolved and become a key external policy instrument, the other envisaged pillar of the Communication, electoral assistance, despite the conspicuous investment, has not been received of an equal degree of institutional attention and related operational development.

Election observation is guided by a clear, systematic and regularly updated policy and methodology while the “EC Methodological Guide for Electoral Assistance”, which makes use of the Electoral Cycle Approach methodological tool, dates back to 2006. This approach remains pertinent since it advocates for long term support, notably in the period between elections, fostering capacity development and knowledge transfer for sustainability resilience to eventual democratic setbacks.Ten years down the line, we can conclude that the electoral cycle approach has yet to be fully implemented when it comes to long-term support in the period between elections. Furthermore, support to electoral stakeholders remains largely focused on electoral management bodies and is thus unevenly spread among the other electoral stakeholders, including local authorities.

In this context and on this symbolic date, ECES and EPD, reconfirm their commitment and readiness to implement electoral and democracy assistance projects and programmes in a tailored and holistic way. ECES and EPD jointly ensure a global, empirical-based understanding of the multiple challenges related to support throughout electoral cycles, stemming from extensive field experience from having implemented activities in more than 200 projects in more than 130 countries for over 100 Million Euro. These projects occupy 1,200 persons at present among the EPD members, in more than 50 Project/ Regional offices. This broad presence is a testament to the resources and knowledge that ECES and EPD have in relation to electoral cycle and democracy support, as funded and therefore shaped by the EU, its Member States and other European donors.