On Thursday 7 June 2016, the Deputy Secretary-General for Economic & Global Issues of the EEAS, Christian Leffler, NIMD Regional Representative in the Eastern European Neighbourhood, Levan Tsutskiridze, and NIMD Representative in Uganda, Kizito Tenthani, met at the Dutch Permanent Mission to the EU to discuss how the EU and its member states can address local politics in development policies and engage with political parties.

Mr Leffler underlined the importance of political parties in the democratic process and emphasised the commitment of the EEAS to strengthen their role. Three principles are at the core of the EU’s engagement vis-à-vis political parties: accountability, inclusiveness and transparency. In order to engage effectively with political parties, Mr Leffler also highlighted the importance of two different phases: firstly, the EU has to integrate parties in formal or informal dialogues, so that needs and concerns are more clearly understood; secondly, the EU must promote different forms of assistance to strengthen the setting in which parties operate. According to Mr Leffler, the EU’s willingness to engage on this issue is underlined by the clear focus given to political actors in the 2015 Action Plan on Human Rights and Democracy. 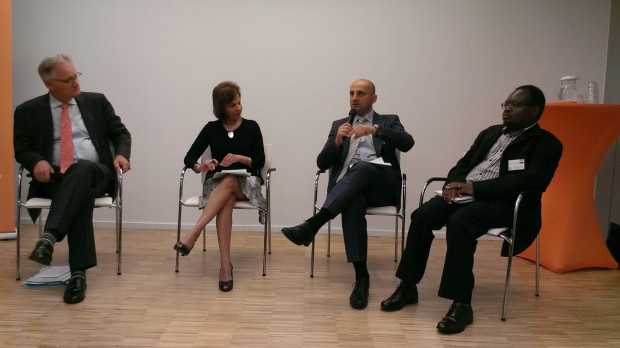 Mr Tsutskiridze focused more specifically on the topic of inclusiveness, recalling his experiences in the Southern Caucasus. NIMD has been one of the first actors to work proficiently with political parties in the region and its role has been crucial in bringing parties closer to citizens and in shifting parties’ programmes towards more concrete issues. As also highlighted by Mr Leffler, Mr Tsutskiridze outlined the need of engaging with parties through two phases: listening and then acting.

Mr Tenthani discussed the main problems in engaging with young African democracies, presenting the lessons learned from his work in Malawi and Uganda. In this case, the role of NIMD is crucial to make parties work together and engage new actors otherwise excluded from the political processes. Mr Tenthani also underlined two major challenges: strengthening the legal framework and improving the regulation of financing.

The three speakers also agreed on the importance of working with a flexible approach at any level and throughout the whole political spectrum, taking into consideration the political and socioeconomic context of the country and insisting on women and youth involvement.