The Netherlands Institute for Multiparty Democracy (NIMD) supports political parties in young and developing democracies, mainly by strengthening the capacities of the parties and bringing them together so that they can jointly work on political issues.

NIMD started working in Myanmar in 2014, teaming up with Demo Finland to run the Myanmar School of Politics (MySoP). The MySoP courses, held at regional and state-level, offer politicians from different parties the opportunity to talk and learn together in a multiparty setting. It allows them to improve both their theoretical knowledge and practical skills. For most of them this is the first time they receive training on topics such as how to debate, the importance of listening to each other and agreeing to disagree, how to formulate policies etc. The school also functions as an interparty dialogue platform where the politicians discuss issues such as health, education and the economy and try to design solid policies around them.

The first course of the school took place in the Tanintharyi region in 2014. Another two were organised in the Shan and Mon states in 2015. So far, the school has delivered 44 alumni, who remain an important target group for the programme even after completing their course. “What the MySoP training made me realise is that as different political parties we need to collaborate with each other and support each other in order to realise the rule of law and ensure accountability in all sectors, with the help of our citizens”, said Yar Zar Soe from the Dawei Nationalities Party after completing the Tanintharyi class.

During the last general elections of November 2015, 17 alumni of the Myanmar School of Politics ran as candidates. Five of them were elected to either a regional or the national parliament, and one alumnus was elected as Ethnic Minister in the Shan State.

Comparing different variations of democracy and learning from international experiences is one of the effective approaches used at Myanmar School of Politics. NIMD and Demo Finland have, for example, translated and released a number of publications in Myanmar language, such as the political skills manual “Becoming a better Politician”, first published in Dutch, and the translation of the Social Justice course of Harvard University. This course was presented to the alumni during a special meeting in Yangon in August 2015. A few months before, the alumni met with a Dutch and a Finnish MP during one of their training sessions.

From the 13th to the 18th December MySop organized a training course ’How to be a great MP’ in Khao Yai, Thailand, which was aimed at equipping recently elected MPs to the Karen State, Kayah State, Shan State, Mon State and the Tanintharyi region parliaments with the necessary skills and tools to hit the ground running when entering parliament in 2016. The trainees represent over 10 different political parties, while the facilitators for this intensive course were (inter-)national experts on issues such as federalism, presentation techniques, outreach, negotiation and organisation. 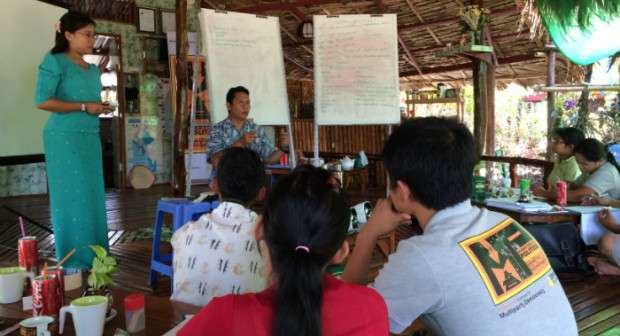 In the years to come the Myanmar Schools of Politics programme will focus on rolling out additional Schools. NIMD and Demo Finland will also be setting up multi-dialogue platforms at the state and regional level and assist the parties in Myanmar, whose role is pivotal in Myanmar’s path to becoming a transparent and inclusive democratic society, in strategic planning and in their efforts towards becoming more programmatic.