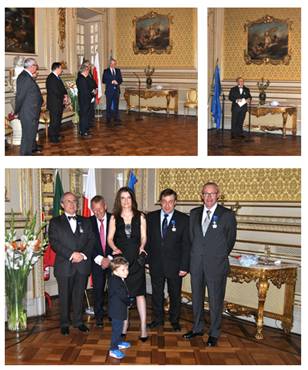 EPD hereby congratulates Professor João Carlos Espada (Institute for Political Studies, IEP) for the award, last May 12, of the Knight’s Cross of the Order of Merit by the Republic of Poland – an award assigned to “foreigners who have contributed in an exceptional way for international cooperation and for the cooperation between the Republic of Poland and other countries”. (In January 2012, Professor João Carlos Espada was awarded the Bene Merito Distinction by Ministry of the Foreign Affairs of the Republic of Poland; in June 2010, he was awarded The Medal of Gratitude by the European Solidarity Centre  at Gdansk.)

There were two more awards on May 12:

Dr. Sebastião Francisco Seruca Emidio, former president of the Municipal Council of Loulé which is a sister-city with the Polish town of Wieliczka.

The award ceremony  took place during the day of the commemoration of the Polish Constitution, at Palácio Foz in Lisbon, on May 12 in the presence of representatives of the diplomatic corps and Polish and Portuguese governments, as well as the Vice-Chairman of the Sejm (Lower House of the Polish Parliament), Hon. Eugeniusz Grzeszczak.

The Institute for Political Studies of the Catholic University of Portugal (UCP) is the member of EPD’s Community of Practice.