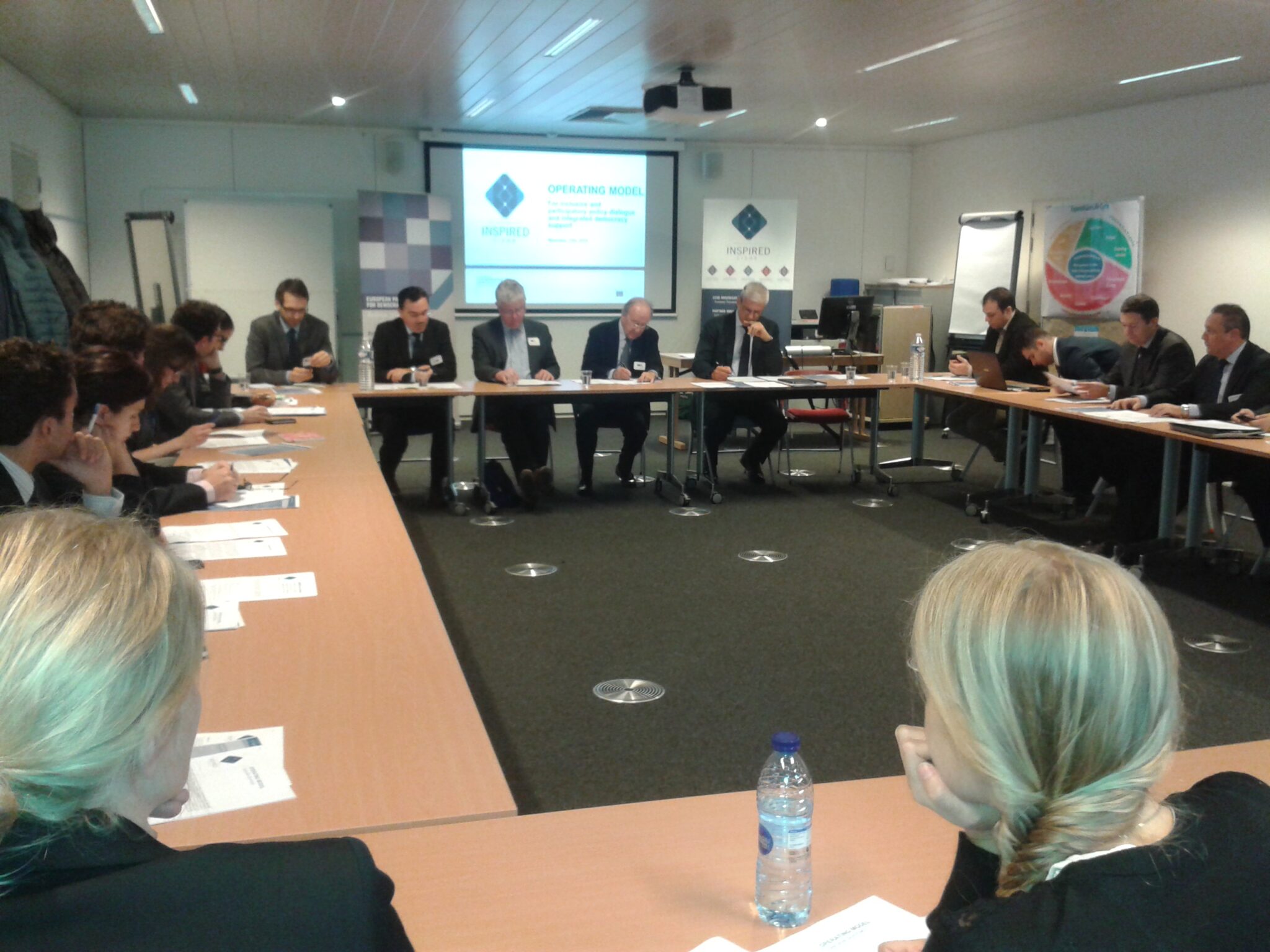 The European Partnership for Democracy (EPD), along with the European Commission and the European External Action Service co-organised the final event of the INSPIRED programme on Thursday, November 13, 2014.

During the conference, EPD presented its Operating Model, which outlines the methodology and practical phases of inclusive and participatory policy dialogue and integrated democracy support. The design and concept behind the Operating Model draws from the experiences and practices of INSPIRED in Tunisia, Morocco, Ghana, Moldova and Kyrgyzstan, but also from the shared experiences and knowledge of EPD’s Community of Practice as well consultations with other practitioners.

The conference, which took place in the European Commission premises in Brussels, was geared at bringing together experts from the Member States and the EU institutions, along with stakeholders and practitioners of democracy support. The input from the participants and the conclusions drawn from the fruitful discussion on the Operating Model are set to be included in the final version of the INSPIRED Handbook, which will be published in early 2015.

During the conference, EPD presented the Operating Model’s three main phases; the collective assessment, the consensus building and the monitoring and alignment, while the INSPIRED partners from Moldova and Tunisia presented their experiences and projects along this framework.

Ahmed Driss from Tunisia, explained how INSPIRED had focused on social justice, corresponding to the demands of the revolution in the country, while Moldova’s Sorin Mereacre and Alesandru Coica spoke about how the programme had increased the transparency of the Deep and Comprehensive Free Trade Area (DCFTA) negotiations between the EU and Moldova.

Both the Moldovan and Tunisian partners spoke about the complexities encountered while trying to bring different stakeholders together, while highlighting the crucial role that the political environment in their countries played in determining the pace and focus of the dialogue.

Questions touched upon pertinent issues currently dominating the democracy support discussions, including how to identify and bring stakeholders to the negotiating table, how to ensure impartiality by the EU and other external actors and to what extent the EU delegations and institutions should be visible in such efforts. Lastly, participants discussed the dilemma in which ruling parties find themselves when having to push for reforms, bearing the risk of losing re-election in the process.

EPD’s Executive Director and the conference’s moderator, Nicolas Rougy, expressed his hope that the Handbook would be one of the many lasting legacies of the INSPIRED programme.

Rougy hailed INSPIRED as a perfect example of the Community of Practice, where the exchange of best practices, experiences and expertise help the design of comprehensive strategies towards democracy support. As such, EPD partners, the Netherlands Institute for Multiparty Democracy (NIMD) and the Club de Madrid, advised the local INSPIRED partners in the five target countries throughout the programme and provided direct input for the development of the Operating Model.

Sylwia Domisiewicz, speaking on behalf of the EU institutions, labeled local ownership a crucial element in any successful democratic transition, and congratulated EPD and its partners for providing valuable lessons of facilitating such an approach.

Club de Madrid Secretary General, Carlos Westendorp, spoke of the capacity of European Member States to share their own experiences about democratic transition with other countries while Hans Bruning, NIMD’s Executive Director, warned that it was practically impossible for external actors to be neutral in assisting democratic transition, but suggested that “what is important is to try and be as impartial as possible”.

Former President of Serbia and Club de Madrid member, Boris Tadić, shared his country’s experiences with cultural dialogue and reconciliation during his premiership and congratulated the efforts in Moldova and Kyrgyzstan through the INSPIRED programme, which he had supported through two field missions. Tadić also highlighted the need to include all stakeholders in such a reconciliation process, such as political opponents and in the case of Serbia, the Orthodox Church.

An executive summary of the INSPIRED Handbook is available for download here. If you are interested in receiving a PDF of the draft handbook or the final version when it is published, please contact [email protected]