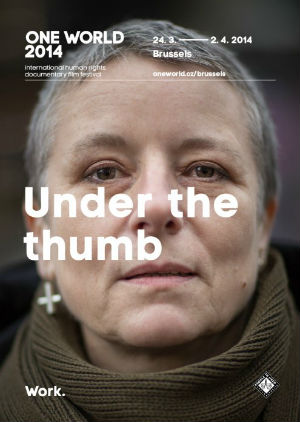 The eighth edition of the human rights documentary film festival One World in Brussels will take place from 24th March to 2nd April 2014.

It is organized in cooperation with the Permanent Representation of the Czech Republic to the EU, Czech Centre in Brussels, European Parliament, Goethe Institute, the Misson of Norway to the EU, member organizations united in the Human Rights and Democracy Network, Brussels-based United Nations Regional Information Centre (UNRIC), film festivals Movies that Matter (The Hague) and Festival des Libertés (Brussels) and other partners. The main media partner is European Voice.

Brussels will see the best films of the international One World Festival which will be held in March 2014 in Prague and in dozer of other cities in the Czech Republic. The screenings will be at te Czech Representation as well asi in the Bozar Centre for Fine Arts, the European Parliament, the Goethe Institut and the Misson of Norway to the EU.

All the screenings (except the opening film in Bozar) are free of charge. However, tickets must be registered for in advance at www.oneworld.cz/brussels. There are additional requirements for attending the screenings at the European Parliament (EP) for those that do not already have an accreditation to enter the EP.