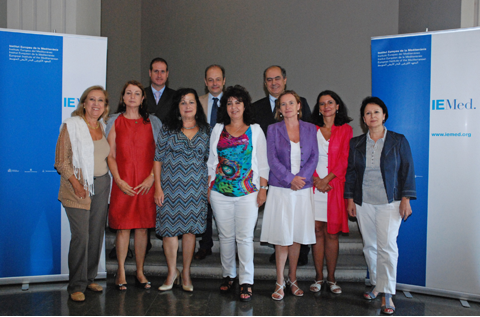 While held in Paris this Thursday, September 12th, 2013, the Ministerial Conference on strengthening the role of women in society, women’s associations, research centers, institutions known for their commitment to the rights of women in the Mediterranean have joined forces and taken the initiative to launch the women’s Foundation of the Euro-Mediterranean.

Those above were the network academic and scientific Euro – Mediterranean on gender and women (RUSEMEG), the Forum women Mediterranean (France), of the European Institute of the Mediterranean (Spain), the Federation of the Democratic League of women (Morocco), CAWTAR (22 Arab countries) and the French State.

Gathered in Barcelona at the premises of the IEMED, these structures wanted to give greater visibility to the actions and programmers for the empowerment of women. They also reaffirmed that there cannot be democracy without participation of women in equal shares in society.

They found that in the current economic institutional and social crisis context in Europe and the Mediterranean, societies do not give women their rightful place and the necessary means for their individual achievement.

Women have been active and present in the process of democratic transition and social movements; they want to see their rights recognized.

They are convinced that a real involvement of all partners, pooling of skills and resources, as well as a synergy of knowledge on gender, civil society and public policy initiatives are today essential to advance equality between women and men.

Thus, these actors and actresses of equality in the Euro-Mediterranean region have created a gathering tool.

The Foundation of the Euro-Mediterranean women will be the link previously missing between the different actions and different actors and actresses working for the rights of women in Mediterranean.

The press release is available for download in English and French