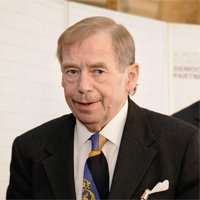 Yesterday Václav Havel died, Czech playwright-philosopher-president, tireless democracy and human rights activist and great European. As one of the eminent founders of the Charta 77 movement in Czechoslovakia, he became the embodiment of the Velvet Revolution in 1989, the mobilisation of people’s power which ended communist dictatorship through peaceful dialogue. The Velvet Revolution became the template for peaceful transitions to democracy ever since and Václav Havel the champion for people’s struggles for democracy all over the world.

He was not only instrumental in bringing an end to the old cold-war dominated world, but he became a source of inspiration and a friend of all those who believe in human freedom and in societies based on the respect for human rights and democratic governance.

One of his commitments to advance democracy was the establishment of the Brussels based European Partnership for Democracy (EPD) in 2008 of which Václav Havel became the President of the Board of Patrons. As a coalition of organisations in Europe supporting democratic transitions, he wanted EPD to make European lessons in peaceful transitions available to partners elsewhere in the world struggling for democracy. He strongly believed that Europe could and should do much more.

For Václav Havel, the main challenge in today’s world was the creation of a new model of co-existence among the various cultures, peoples, races and religious spheres within a single interconnected civilisation. He warned that this task cannot be accomplished through technical means.  He meant that it cannot be accomplished through the invention of new organisational, political and diplomatic instruments alone. Adhering to the principle that all power derives from the people – the fundamental idea of democracy – was not enough in his words.  As he said:  “we must go farther and deeper”.  The idea of human rights and freedoms must be an integral part of any meaningful world order.  “Yet”, Václav Havel said, “I think it must be anchored in a different place, and in a different way, than has been the case so far.”

This search for a deeper anchoring of humanity in an interconnected, culturally diverse world at peace with its earthly resources and the universe at large, is the challenge in a rapidly changing world he left us with today.