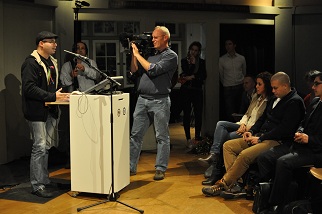 Ahmed Maher, one of the co-founders of the April 6 Youth Movement, and a prominent participant in the anti-Mubarak demonstrations in Egypt in 2011, visited the Hague to exhange views about Egypt’s new democratic horizons and to receive the Democracy Ribbons Award.

Extracts of the interview (in English):

‘Army has hijacked the revolution’

Ahmed Maher (30) established the April 6 youth movement in support of striking workers. Now, the movement is the striving force in the struggle for democratic change in Egypt. Ahmed Maher was invited by the European Partnership for Democracy to receive the Democracy Ribbon on behalf of the ‘Youth of Tahrir Square’.

Tahrir Square is again full of demonstrators. They demand that the Egyptian Army give up power. “The second phase of the revolution has begun”, according to Ahmed Maher.

Maher:  “The military has led Egypt since 1952. They have factories, farms and $1.3 billion a year in the United States. It is very difficult for them to give it all up and transfer the power to the citizens.

“The army states it cannot transfer power because that would mean they would betray the people. Maher mentions that the army uses the same phraseology as Mubarak. They refer to ‘hidden hands of foreign enemies’, they try to finds words to keep in charge – chaos, stability, betrayal. The Transitional Military Council should withdraw from the board, we want a civil country, the army must only protect our borders.”

NRC Handelsblad: “Elections begin on Monday (29 November). How important are they in the democratisation process?”

Maher: “Not very much. It’s a dirty game. But they can help the revolution come back on the right track again. The elections will turn out bad and therefore they will evoke resistance. Supporters of Mubarak’s old Party have formed eight or nine new parties and they also participate as individual candidates. The army has not excluded them from the election. I think the Muslim Brotherhood and related groups will get 35-40% percent of the votes, as well as the Mubarak supporters. The remainder will goes to the revolutionaries. I expect a lot of violence of street fighters and armed Mubarak supporters”.

According to Maher, the April 6 Movement does not join the elections because the men of the former ruling Party still have the money and the power. These are not our elections. First the rules have to change.

He adds that change takes a long time. “Look at Eastern Europe, in Poland it took ten years to build a democratic regime. Look at Ukraine, at first they were successful, but after a few years the old regime returned.”

NRC Handelsblad: “Is it possible that this would happen in Egypt?”

Maher: “This is what we are fighting against now, this is why we are at Tahrir”. (…) “Imagine all the blood for nothing, all the martyrs for nothing.”