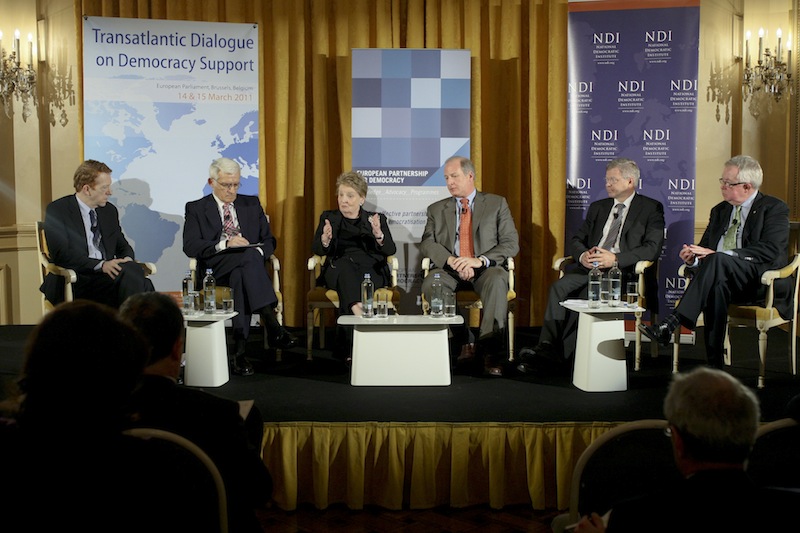 On March 13-15, 2011, the Transatlantic Dialogue on Strengthening Cooperation on Democracy Support held its second conference in Brussels, Belgium. Initiated in June 2010, with an opening conference in Washington D.C., the venue of the second and final conference of the first phase of the Dialogue convened in almost its entirety in the Paul-Henri Spaak Building of the European Parliament.

Discussions were framed around seven working papers commissioned to various experts in democracy support, topics ranging from the necessity of engaging emerging democratic powers in the global democracy support agenda, rescuing the reputation of democracy support and political inclusion in foreign policy agendas, thinking about lessons learnt and the way forward in supporting state-building in fragile states, categorizing authoritarian and semi-authoritarian regimes to provide a coherent response to changes in such regimes, to analysing synergies between democratic and socio-economic development.

Co-chaired by Jerzy Buzek, President of the European Parliament, Madeleine K. Albright, former U.S. Secretary of State and Chairman of NDI, Javier Solana, former EU High Representative for the Common Foreign Security Policy, and Vin Weber, former Congressman and former Chairman of the National Endowment for Democracy, more than fifty participants debated and agreed on a Statement on the best way forward for democracy support. The final version of this Statement will be published in a few months time.

The conclusions reached, always keeping in mind the recent developments in Europe’s neighbourhood and the need to have a set of clear strategic goals for an effective and coherent policy for democracy support, included some of the following:

The Transatlantic Dialogue expressed its hope that forthcoming observations and recommendations would be further discussed and incorporated in other debates and fora, and that the Dialogue would continue, as the first phase is only the beginning of a potentially very fruitful collaboration between government agencies, implementing NGOs and think tanks on both sides of the Atlantic.